Before getting the ferry back to the UK we decided to head towards Dublin, so that we could spend a day in the city and also take Matt’s brother Kenny up on his promise to buy us lunch if we visited The Hot Stove where one of his best friends Toby is the Su Chef.  It was a bit of a shock to the system being back in a city, but after recovering from the amusing bus ride (you had to be there) with a strong coffee at the ‘Coffee Academy’, Matt and I went exploring.

For me, this meant a whistle stop tour of all vintage dress shops in preparation for our black tie visit to Burgh Island for Joe’s 21st.  For Matt, this meant making a bee-line to the barbers to get rid of his ‘silly hair’… and resurrecting his favourite bowl type hair cut from which his pub nickname  ‘Lego’ had been born.

We reconvened at The Hot Stove feeling slightly underdressed, but looking forward to Toby’s gourmet delights with great anticipation.  Needless to say they did not disappoint!  Matt and I enjoyed a delicious lunch, that tasted amazing and lasted most of the afternoon… ‘Nice one Toby’…’Cheers Ken!!’

During all of the week we then seemed to go from one treat to another, as that evening we were welcomed to dinner as the unexpected guests of Louie and Mary (my Uncle Alexis’ Brother and Sister-in-law).  After a deft bit of parking by Matt as he impressively manoeuvred Heidi backwards through the gates of their drive way we where greeted with great enthusiasm by the Fitzgerald/ Bannon clan.  It was great to catch up with Kate and Ian (two of Louie and Mary’s three children) and their cousin Joanne all of whom I hadn’t seen since we were all much smaller.  And of course see Pauline & Alexis, who were thrilled to have so many nieces and nephews gathered together.

What followed was a delicious meal full of lively discussion and banter and a liberal pouring of wine, after which Matt and I stood in rapture at Louie and Mary’s amazing art collection which consists of an incredible array of stunning paintings from a variety of genres along with some beautifully crafted pieces of furniture and the embryonic sculpture collection (started surreptitiously by Louie, who is now officially banned from buying more paintings).  After a great nights sleep we fired up Heidi and headed slightly bleary eyed to the ferry bound for Liverpool.

The ferry was mainly a cargo ferry with a small passenger deck and being a daytime crossing was much less erie than our previous journey.  The only bit of drama being that after playing an elaborate version of Tetris with the lorries, containers and vehicles on the way, in the deck crew struggled to unravel their vehicular Rubix cube on the way out, leaving one irate lorry driver having to back his spangly new vehicle down a steep ramp with a gap of only a few inches either side (Matt at this point was mentally preparing himself to stubbornly refuse to do same and lay down in front of Heidi if need be).  Luckily it did not come to that and we disembarked safely and headed northwards to Maureen and Barry’s (the Adlington contingent of the Kidson clan). 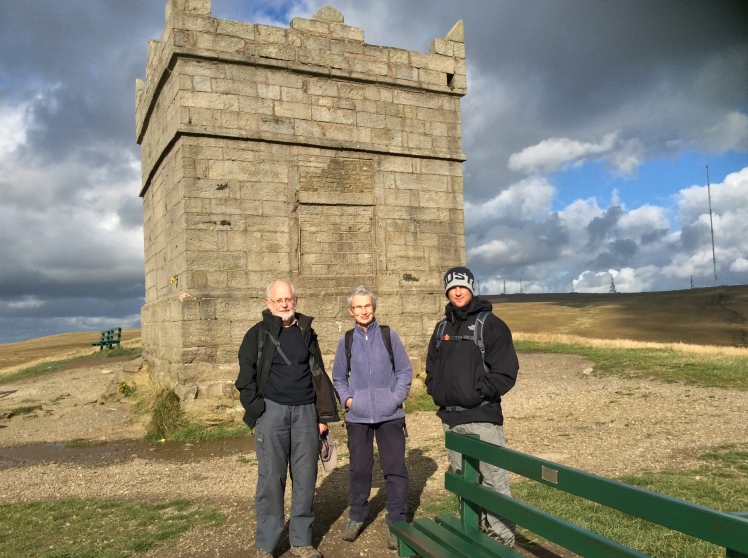 Being with Maureen and Barry was brilliant and brought back happy child hood memories of our many family holidays adventuring with my cousins (Rachel, And and Matt). We stayed in a room filled with all the books that absorbed and enchanted us all as kids.  I was able to introduce Matt to the joys of ‘Rivington Pike’ where much adventuring was done and where I had been initiated at an early age into a love of walking. Maureen and Barry are walkers extraordinaire, regularly adventuring from peak to peak on various week long walking holidays.  Matt, walking behind Aunty Maureen, exclaimed in a moment of awe that ‘she seemed to be able to balance on the smallest rock with the agility of a mountain goat’… not quite sure what she will make of that comment?!

In addition to adventuring, our two days with them were filled with animated political discussions (from the recent Labour party leadership elections, to the history of the republic of Ireland, to Gaza and beyond)…that, combined with Uncle Barry’s well renowned generosity with wine mean’t that  Matt and I were in our element!!

It was with a slight hangover that we reluctantly said goodbye and missioned it down to Devon in anticipation of Joe’s Birthday.

The approach to Burgh Island was a tad stressful to say the least.  We had thought our previous night’s stay in a campsite near to Hope Cove was ‘off the beaten track’ (leading to a somewhat anxious Matt as we wound our way round skinny walled roads), but actually that was child’s play compared to the slow and painful descent to Bigbury on Sea as we tried to play chicken with throngs of oncoming vehicles fighting for their right of way down the narrow lanes.  I have to confess to loosing my nerve at one point and shouting at Matt to ‘Brake’ in rather an aggressive tone which he pointed out to me was not overly supportive (but I think he might have said rather more if I had been the one driving!).   Eventually we arrived and met the hotel driver who directed us to the field that would be Heidi’s home for the next two days before heading down to towards the beach for our 2pm rendezvous with my folks.

Slightly concerned that we had got the wrong meeting point, we were relieved to spot the little convoy heading towards us and out of the two cars piled my two brothers, my parents and two of Joe (my youngest brother)’s best friends Russell & Hendrick… the celebrations had begun!

For those of you who are unfamiliar with Burgh Island, it is a rather ‘unique’ place, kind of a cross between Mapp & Lucia, Poirot and Fawlty Towers.  Built in the late 1920s and early 1930’s the iconic Art Deco Hotel has been the setting of many a famous rendezvous and various Agatha Christi murder mysteries.  Each room is themed around their historic famous and infamous guests.  For Matt and I it was Josephine Baker famous French erotic dancer, singer and actress know for taking a stand against segregation in the United States.  It was a very characterful room with a stylish sitting room full of iconic items (not to mention the fab view!).

We spend the next two days amusing ourselves with a variety of games.  Phil had brought ‘Banana   grams’ a sort of a twist on scramble which went down well with the Oxford contingent (Russell, Joe and Hendrick) and which Matt and I also enjoyed.  On the opposite end of the spectrum there were also some very amusing scenes as we embarked on a three team competition to see who could build the most successful sand barrier to protect three imaginary circular forts against the encroaching sea.  Dad and Phil won this one not so much for the fort construction but really for the strategic positioning of their fort, which was in by far the best location.

In addition to games there was also much toasting and drinking of champagne as we enjoyed pre dinner drinks with Dad and Sally in their sea facing apartment whilst getting used to our penguin gear (Matt rocking a 1960s tux that he had borrowed from Uncle Barry and me attempting to look waftey and elegant in a couple of vintage bargains that I had picked up… in actuality I just looked rather like an over ripe tomato having forgotten the essential suncream).  Joe, Phil, Hendrick, Russell, Matt and I also enjoyed a beautiful cliff top/ beach walk, with splendid views, streaming sun and stunning rock formations.

But for me the real highlight was getting quality time with my brothers.  I loved being able to celebrate with Joe (HAPPY 21st!), catching up on all his news, enjoying his dry sense of humour and wry smile, and appreciating his patient croquet tutorials (thanks to which I have finally mastered getting the balls through the loops… just about).  And love being able to get some much missed time with Phil, benefiting from his warmhearted and insightful wisdom as we watched a Merlin swooping and diving overhead.