Well at last we are back on the road again. We left my mum’s house in the early hours of Friday Morning and headed for Dover for our ferry to Dunkirk. Only a quick stop at the petrol station in the centre of Dover before we got to the port for some last minute topping up of gas, coffee, marmite and Haribo, which have  fast become my favourite driving companion (after Ells of course)!

So we arrived in France and for the first time got to drive Heidi on the side of the road for which she was made (she’s a left hooker) and not really to our surprise things very quickly made much more sense. Throughout our time on the rather narrow windy roads of Ireland the thought of having to be the passenger filled neither of us with glee, as the motor home’s width and the steering wheel being on the wrong side for Ireland and the UK meant that the passenger had the almost continuous feeling of being driven head first into any oncoming car/van/tractor or lorry, with the outcome on shorter journeys generally consisting of shadow braking and flinching every time we passed another vehicle, to the longer journeys by the end of which it was usual for us NOT to be talking!

So things on the mainland of Europe got off swimmingly, we were heading to Bruges a town that we have come to know and love even though neither of us had been there before. This was due to a great film called “In Bruges” that is in our top 10 of most watched films, it’s a black comedy starring Colin Farrell and if you haven’t seen it you really should. We headed to what we are pretty sure is the only campsite near the city, and though it was raining and only about 10 degrees, the place was pretty busy and I really didn’t think it was too bad (although it had received quite a few bad reviews). The pitch size was small and the motor-home next to us really was “next to us” but it was only a 15 minute walk into the centre and only 5 mins to the nearest Lidl, so a pretty good location. 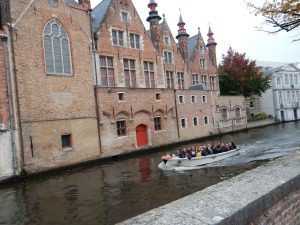 On our first day we walked into the town and just walked around.  There was no plan of where to go, we’d just get to a crossroads see which way we thought was prettiest and go that way, and in Bruges that is a hard thing as in every direction there seems to be something quite intriguing and beautiful. It was great just walking around trying to spot locations from the movie and listening to the Flemish tone which sounds much nicer and softer than the Dutch that it comes from. The other thing you can’t help but be aware of in Bruges is waffles and chocolate, the smell of both is quite literally everywhere you go in the centre of the city and the shops selling them are visually stunning stacked high with the most ornate chocolate treats you can possibly imagine. By early evening we were both coming to the end of our energy (3am start) and decided to head back but agreed to go back the next evening with a camera in hand to see if it was even more magical after dark and hopefully to get some pictures.

The next evening after a lazy day on the campsite and a quick trip to Lidl’s we headed back in to town, we walked around took photos, cricked our necks looking up at the impressive architecture and stopped off at a lovely little bar where I had a taste of my first Belgian beer. It was a blonde beer about 8% and went down swimmingly.  Ells had a Gin and Tonic (the house speciality with over 50 gins to choose from) (Ells chose Mare Gin from Barcelona)which came in a goblet type glass with fresh mint and rosemary and spherical ice cubes and looked fab. At the end of the evening we stopped off for the famous Belgian fries with heaps of garlic mayo.  I’m not sure why or how these things became famous,  as far as I could tell they were just regular frozen fries with about 10 x more mayo than you would normally have, but they think so much of them in Belgium they even have a museum displaying them!

The next day we travelled to the Ardennes, to Rochefort (not the place in France where the cheese comes from)(well now we know!). According to most of the travel guides this is the pretty part of Belgium and on the drive down as lovely as all the well manicured fields looked on the sides of the roads  it was noticeably flat and not overly interesting. That changed however as we started driving up long inclines and fields became trees and flat became hills. The land with its autumnal colours felt inviting and it looked like the sort of place we could “spend a few days”.