After leaving Rochefort we headed south to the Ardennes.

For those of you who have never been to Belgium, it is a little strange as there is a French half (to the south) and a Flemish half (to the north), both of which feel essentially like two separate countries.

The Flemish half (of which Bruges is part) is very distinctive with it’s gable-ended rooftops, it’s soft melodic language which sounds a little dutch and it’s flat landscape (well the bit that we drove through was flat anyway).  The French half feels much more… how can I say… French.  Essentially we felt as though we could have been in France other than the fact that the accent was somewhat more abrupt and the towns weren’t quite as pretty (well the ones we drove through anyway).

Whilst we had fallen in love with Bruges, we found the French part of Belgium somewhat unwelcoming.  This may have been to do with the fact that it was the end of the season (and lets face it, if you had been having to deal with a load of tourists all asking the same questions all summer you might also be a little surly in manner).  It could have also been to do with the campsites we chose, we were experimenting for the first time with our ASCI discount card (which enables you to camp for €16 per night, well… €16 plus a ‘discretionary surcharge’) and suffice to say the experiment did not go that well!

We should have been alerted to the fact that our chosen campsite (located near Erezee in the Ardennes) may not have been as lovely as the ASCI book made out when we were flagged down a few miles from our destination by a very enthusiastic red-faced man in a van.  At first we thought he must have mistaken us for someone else, but as the arm waving and enthusiasm continued we realised that Monsieur Dominique was trying to persuade us to head to the campsite that was in fact already our destination.  As it turned out his wife apparently worked in the bar there.  Being the naive travellers we are, we took this enthusiasm as being a good sign as opposed to the campsite being desperate for trade (another rookie mistake).  On arrival we immediately knew our mistake when we rounded the bend in the picturesque valley to be confronted with a sprawling monstrosity of static caravans that made ‘The Plantation’ (our local gypsy caravan park in East Grinstead) look like Windsor Castle.

Unfortunately fate had decreed that we were to partake in Monsieur Dominique’s over embellished recommendation as we were pretty much out of diesel, and the nearest petrol station (and really all the petrol stations we had seen) apparently did not open on Monday (a fact which somewhat in-sensed my efficiency loving Matt).  So with true British resilience we decided to grin and bear it, after all… it had a bar restaurant (where people looked at you as though you had just arrived from Antartica) … the lady at the desk spoke English (in a very condescending tone)… and the guy who showed us to our pitch amongst the maze of static caravans was very friendly (as he told us that they had to keep the electricity under lock and key to stop the regulars nicking it).  So with a sense of trepidation we parked up in Heidi and headed to the toilet block to use the facilities.

In someways the toilet block was the campsite’s ‘piece de resistance’ and pretty much summed up the whole experience.  The outside was actually quite architecturally interesting… they had obviously received some kind of grant or funding for this uncharacteristically well-designed addition to their site (a suspicion that was confirmed by a plaque on the wall).  However, on closer inspection it appeared that the owners must have fallen out with or not paid the architect or building contractors (or both), as it pretty much seemed as though everyone had downed tools halfway through the job, leaving a some what eerie interior with a warren of half empty echoey rooms (made more echoey by the screed floor and high ceilings), a plethora of unfinished pipework and a huge humming generator that seemed far too big for the job it was having to do.  All in all, torch in hand, going to the loo felt rather like being on the set of ‘Scream’ where you could imagine the audience at home furiously shouting ‘he’s behind you’ at the tele screen to no avail.

Luckily we made it through the night without mishap, helped by the ‘One Foot in the Grave’ box set that I bought Matt (so that he did not feel so alone during his occasional ‘Meldrew moments’) and a large quantity of alcohol.  The next day, we beat a speedy retreat and headed once more through the Ardennes to try out another ASCI campsite near Berguème.  Dramatically smaller, and rather more picturesque, this one was a huge improvement (despite the fact that you got the impression that the landlady would much rather you had just driven past and left her alone), so we decided to stay for a couple of nights, which meant that we could do some exploring.

The next day we set off for a 4 hour walk in the hills.  We were, I must say, both feeling a little blue, as our spirits on this leg of the journey had been somewhat damped by the lack of friendly faces and the grey drizzly skies that had now become the norm.  But as we walked further and further into the tree covered hills of the Ardenne, we felt our spirits lifted by the patchwork of gold and russet leaves that sheathed trees of every imaginable variety, heralding Autumn’s debut.  Our walk was punctuated with a number of intriguing encounters.  Firstly, with two rather impressive birds of prey (unfortunately we were unable to take a proper photo of these wide winged hunters, even with the super zoom of our new camera, as they were too far away), secondly, with profusion of fungi that we discovered hiding within the depths of the canopied forest (we took rather too many photos of these!) and lastly, with some beautiful looking cows who seemed rather bemused by us (as we tried to cajole them into posing for us).

From Berguème we headed into Luxembourg staying at a campsite on the outskirts of Esch-sur-Sûre (a little town on the edge of the river Sûre) for one night, before heading east to visit Vianden, (a slightly larger Luxembourgish Town famous for it’s castle).  We rocked up in Vianden at about 11am and, after settling Heidi in a most convenient free-parking spot, headed for the Castle.  In terms of a value-for-money tourist attraction, it did not disappoint and after visiting the nineteen odd rooms and checking out the ‘L’exposition du L’AIR DU CIRQUE which featured a sketches by Picasso, Chagall and Henri Toulouse-Lautrec amongst others, we felt that our six euros a piece had been very well spent.  Encouraged by this successful encounter, we decided to go one step further and check out the house of Victor Hugo the famous French poet and author of Les Misérables.  This also did not disappoint, and though (randomly) none of his poems for which he was famous were visible, the little four floored museum featured a plethora of letters, sketches, cartoons which all made interesting viewing. 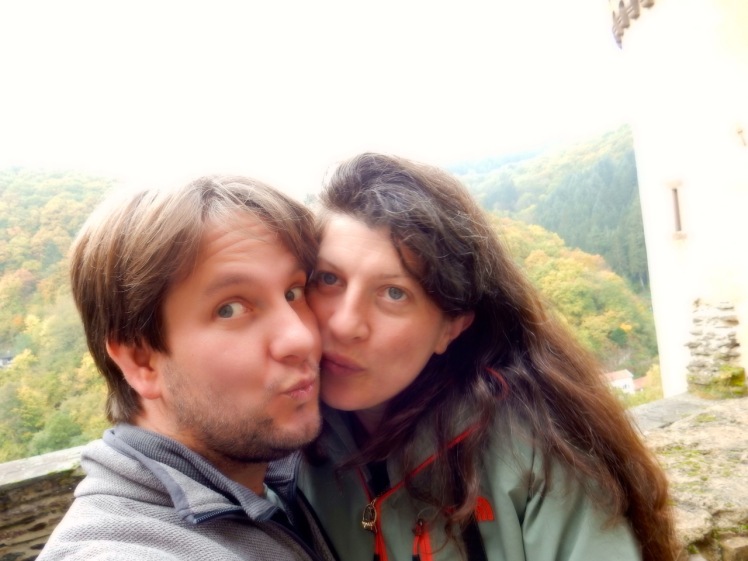 After our mild flirtation with these rather economical tourist attractions we headed back to Heidi, wolfed down a couple of bacon sandwiches, and hit the road once more.  This time our destination was Niederanven a town located about 16mins north-east of Luxembourg City, and home to my cousin Dom, her husband Paul and their three boys Chobe, Kai and Jacob.

Arriving ‘Chez Dom’ we received an enthusiastic welcome firstly from Dom, Paul and Kai and later from Chobe and Jacob upon their arrival home from school.  In the evening we tucked into some tasty steaks, courtesy of Dom and the quarter-of-cow that they had bought with some friends (which was still taking up most of their freezer in the form of steaks, minces and various cuts of beef)..Yummy!

The rest of the weekend was one big Rugby fest…On Saturday morning we went to watch Dom coach the RCL under 6’s and under 8’s (of which Jacob was one) playing a friendly against Walferdange (another Luxembourgish rugby club).  Dom had been dreading this slightly as she was feeling a bit under the weather and the prospect of shepherding about 300 children round the enormous Rugby pitch (even with the help of the other coaches and parents) was some what daunting.  She did a brilliant job though, and we found it really funny watching all this little kids running around like bumper cars and getting properly stuck-in in their enthusiastic pursuit of the ball.

Later that afternoon we saw the grown up version, as we caught the end of Chobe’s under 16s match, which despite my distinct lack of Rugby knowledge, seemed pretty impressive and despite being one of the younger members of the squad, Chobe (judging from Matt and Dom’s elated shouts and cheers) appeared to be holding his own.  On our arrival back (we had pretty much made ourselves at home) we were pleased to hear that Kai’s under 14’s team had also won their match in Ghent (under Paul’s tutelage) pre-empting a late night for Paul as celebrations in Ghent got underway.

Meanwhile back in Niederanven we enjoyed our own celebrations as Dom had invited Jess (a childhood friend of Matt’s who’s family he had grown up with) and her partner Julian (who she was now living with in Luxembourg) to dinner.  Matt and I had found out that by pure coincidence that Julian and Jess were good friends with Dom and Paul at Jess’s brother’s wedding when the ‘I don’t suppose you know…’ question had actually paid off for once.  So it was great to get the opportunity to catch up with them over a lovely fish pie dinner (prepared by Dom) followed by some more Rugby entertainment.  The next day was a proper Sunday with lots of relaxing and playing with the kids and the culmination of our weekend of Rugby in the form of the Australia/Argentina semi-final.

On Monday morning we got up early to say goodbye to all the boys as they headed off to school before heading off ourselves for a look around Luxembourg city.  Luxembourg city was surprisingly small yet characterful with an impressive valley running down the centre of it in the shadow of an enormous viaduct.  Matt and I had quite a laugh as we meandered around feeling fairly lazy in comparison with a large number of licra-clad over 60s (exhibiting various levels of exhaustion) who seemed to be taking part in some kind of city wide scavenger hut.  Having ourselves exhausted the sights of Luxembourg city we retrieved Heidi from a rather large open air car park headed south to France in pursuit of Champagne and sun.